"Just listening is a ticket to an altered consciousness. The bell-like rhyming words, the vibratory vocal overtones, Redmond's infectious rhythms (more Middle Eastern than tabla-like), Steve Gorn's soothing flute, and the hauntings drone of the sitar and the tuned windwand can easily carry you to a peaceful centeredness. If nothing else, this album will make you appreciate the hand-played frame drum; Redmond really rocks."

"Layne Redmond can still hear the faint feminine rhythms of the ancient Mediterranean world - a time filled with women frame drummers celebrating their goddesses. In this age of unhealthy arrhythmia and dis-empowerment, she brings the pulse back to the people through her work as a teacher, composer and performer. The frame drum is reincarnated as an instrument of power in Redmond's hands thanks to her deft technique, ear for nuance and passion."

"In a world full of copycats and wannabes, Layne Redmond is an original. She plays music to make your body and mind feel better. Few can claim to do that."

“Her compositions, and their arrangements, are pure genius; not to be missed!

"Most Americans know the name of one frame drum -- the tambourine. And we give it a single musical role -- to accent the backbeat. But what would happen if we opened the door to frame drums wide open? Could serious technique be applied to make music that matters? Educator and virtuoso Layne Redmond answers "Yes!" in Rhythmic Wisdom, her 70 minute instructional video on the history and technique of the frame drum. Redmond is a good teacher, putting the focus on your learning, not on her performing. She covers basic technique and interlocking rhythms, and enlightens us about remarkable drums from around the world. Perhaps most striking is Redmond's account of how drumming connects to religion, history, physics, and psychobiology. They say it's just music, but through Redmond's eyes it appears to be a good deal more."

"Glen Velez, Steve Gorn and Layne Redmond are as close as anyone's come to the universal crossover group. Their pretty timbres and pure tuning attract the naive ear. Jazz fans and raga buffs alike enjoy following the variations they spin around their rhythmic patterns, which are complex enough to intrigue experimentalists. Their improvs are cleanly sculpted and motivically intricate enough to satisfy any lover of Brahms. Their rhythms are classic, their melodies romantic, their technique astounding. They probably don't make enough noise to please industrial band devotees; aside from that, they may be New York's most perfect musicians." 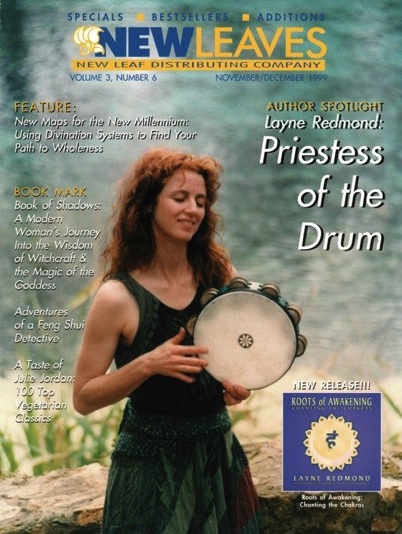 "Layne Redmond, the leader of the Mob of Angels, is a superb percussionist. On Friday evening, she drew an astonishing variety of well-focused sounds from a tambourine, two frame drums and an African finger piano."